RSC Dream 16 John Chapman gives his last account of an eighteen-month Dream-come-true as he shows his Bottom to the RSC one final time.

Your News Our newspaper-style section brings all of your local stories, articles & news items.

All Aboard for Entertainment Richard Evans follows up last year’s popular article ‘A Theatre Lover’s Guide to New York’ with a look at the world of cruising.

Derek Jacobi - cover story Pat Jones teams up with Editor, Paul Johnson to interview one of the world’s best-loved and most critically acclaimed actors - with whom she has been friends for 56 years.

Smoke and Mirrors Two years ago Nick Bennett offered some space in his ‘man-cave’ to his brother-in-law. For Nick it was the start of a strange journey.

One Step Beyond! - No.1 Stamp Your Feet! The Musical came from humble beginnings, to a sell-out performance last year, but it took over four years of hard work to get it on the stage.

One Step Beyond! - No.2 Neil Knipe of ‘Bite My Thumb’ - an amateur theatre company - tells how they took their production of Jim Cartwright’s Two on the road.

Cabbage Soup! What is the perfect recipe when it comes to making theatre for the sternest critics on the market? We ask the experts...
Making It Up As You Go Along Imagine performing a show without a well-rehearsed script. No lines, no directions - just you and your ensemble. Angelini Castellini looks at the growing popularity of improvisation.

I’ll Be in My Trailer! Continuing our focus on Improvisation, Paul Johnson speaks with Ruth Bratt & Philip Pellew from West End performers The Showstoppers.

Hands Off! Vulnerable Venues These are potentially worrying times for societies that don’t have the convenience of running their own performing space. Chris Abbott takes a look at the growing issue of vulnerable venues. 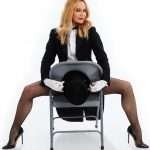