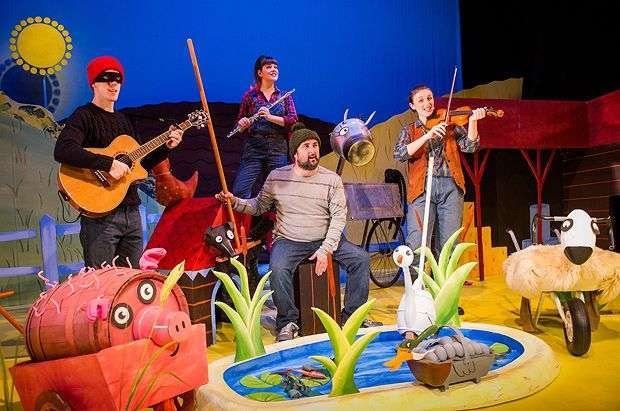 Show: What The Ladybird Heard

What the Ladybird Heard

When I first saw this production in 2017 I described it as a mini-musical for pre-schoolers and I stand by that, four years later. But there are differences: I think the show has settled, the present four actors have a palpable onstage rapport with both the audience and each other and Nikita Johal is delightful as the reassuring, very smiley Lily who also sings splendidly.

The show works on the assumption that the children in the audience are already very familiar with Julia Donaldson’s rhyming adventure story about a ladybird who thwarts a burglary on an idyllic farm. But the show also offers its young audience new things which they’re not expecting: songs by Jon Fiber and Andy Shaw with additional lyrics by Howard Jacques, for instance. The words are witty, simple and clear – in the hands of four actor-musos – and the melodies very simple so that children can pick them up easily.

Another imaginative idea is the use of puppets – assembled from farmyard bits and pieces – to bring to life Donaldson’s cast of animal characters and Lydia Monks’s illustrations for the original book. Monks was involved in the development of the stage show which includes a horse created from a bicycle, an inverted long tin bath and a bucket while a hen emerges from an old brown cushion and a red rubber glove and a goose from a white watering can. It makes good theatre as children are invited to identify each animal as it is realised on stage.

Roddy Lynch is a solid, warm-voiced, comforting figure as the farmer and I enjoyed his sound effects on violin. Matthew McPherson is full of character as Hefty Hugh and a useful guitarist while James Mateo-Salt is an entertaining Mr Bean-ish comic character initially pretending to be a theatre usher drawn into the show because they are one short.

All this is played on a small set, designed by Bek Palmer,  which sits inside the Harry Potter set at the Palace Theatre and it’s good to see very young children in such a historic building acquiring – we hope – a taste for live theatre.